Light is one of the most important factors in greenhouse
cultivation. Get it right and your plants will be happy, get it wrong and they
will be sad! We explain. 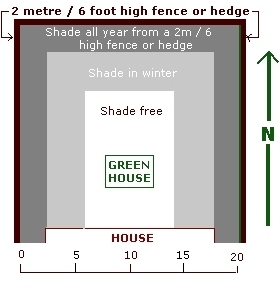 TOPICS IN SELECTING A SITE FOR YOUR GREENHOUSE

Light in Winter and Summer
In summer, unless you have sited your garden greenhouse in dense shade there is likely to be sufficient light for plants to grow successfully. The problem of lack of light is most likely to occur in winter and spring when the sun is low in the sky.

Unfortunately, most garden greenhouses are bought and erected in the summer months in preparation for the following spring. The shading effect of trees, hedges and other structures may appear minimal in the summer but when winter and spring come along, they may reduce the amount of available light considerably.

The shading effect of a tree, fence hedge or building does depend where in the world you live. But on average the rule of thumb is that in winter (around December and January) an object will cast a shadow three times it's height.

In late spring (April), the same object will  cast a very much reduced shadow which is just a bit more than its own height. This shadow is further reduced up till mid-summer. The diagram on the right illustrates the shade effect.

So, if you are building a greenhouse in summer get your tape measure out and measure carefully! 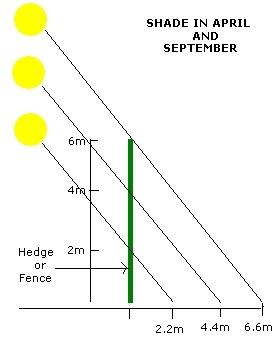 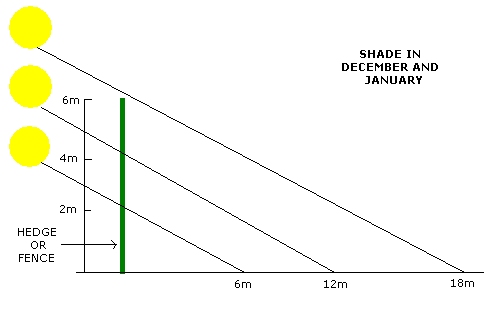 GO TO NEXT PAGE or GO TO GREENHOUSES INDEX