Pears are not usually grown ornamentally with the exception of Pyrus salicifolia ‘Pendula’, commonly known as “Weeping Silver Pear”, grown for its foliage and Pyrus calleryanna, for its autumn colour.

When you read the Latin names you will understand that its leaves are similar to the willow (salix), and also known as the “Willow Leafed Pear”.  ‘Pendula’ has leaves are 80-100mm in length, covered with grey hairs and the tree produces small, white blossoms in spring, followed by small, brown fruits. This upright, deciduous tree originates in the Middle East and grows to 8m in height.  The weeping form, ‘Pendula’ is grafted on to standard rootstocks and is trained to produce a small tree with a weeping habit. 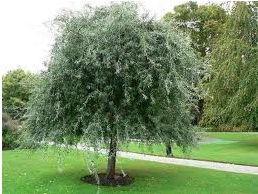 Pyrus callerayana also has white blossom, early in spring followed by small, inedible fruit.  This is also known as the “Callery Pear”, originating in China and Vietnam. It is a much larger tree and is grown for its autumn foliage.  Its leaves are long, dark and glossy, developing a striking, reddish and orange colour in autumn. 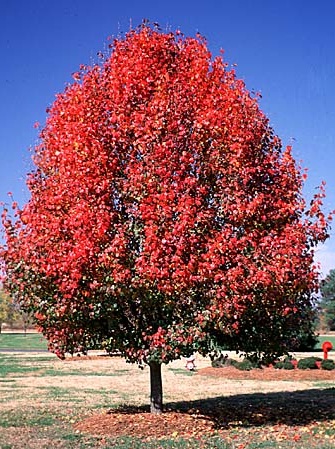 Both species grow well in well drained, moist soil tolerating both acid and alkaline conditions. They can be cut back in spring and shaped without any ill effects.
As with other species of pear, it may be affected by fireblight, honey fungus, mildews and cankers.  Pear slugs, the larvae of sawflies, can denude trees completely of leaves.