The larch (Larix decidua) is one of the few deciduous conifers and is native to Northern Europe, Asia and North America. It has a conical habit with rather open branching and a weeping tendency.

The tree grows to more than 15m in height. Bright green needles grow in whorls along the stems and in autumn become bright yellow before changing to brown and falling. It is a rapid growing tree, producing soft brown cones. It tolerates extremely cold temperatures, -35oC, needing a climate with a distinct winter period and grows well into alpine regions. 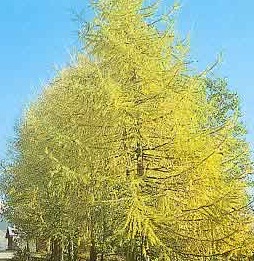 Like many conifers, they do best in moist, cool, well-drained soil.  The genus includes a large number of subspecies and hybridises readily. The most common hybrid being, Larix x marsclinsii. It is useful as a park or specimen tree, its deciduous foliage providing year round interest.

Their needles grow in whorls along the stems

Larches can be raised from stratified seed and some forms can be grafted.