Elms (Ulmus) are large, deciduous trees with deeply fissured bark and simple, alternate, toothed leaves. The flowers open before the leaves and have male and female parts. They are wind-pollinated and form dense, reddish brown clusters.   The single-seeded fruit have a flat green wing surrounding it and can been seen in clusters in spring.  They are extremely tolerant of cold and are often used specimen plantings in parks and large gardens. 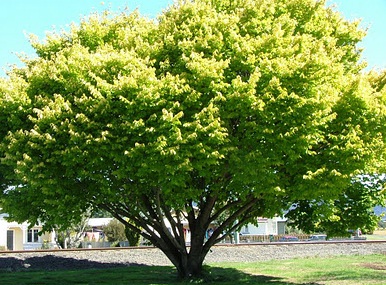 Elms were popular woodland and hedgerow trees, its foliage and branches were fed to livestock and its tough timber was used for chair seats and the hubs of wooden wagon wheels.  Elms were a popular feature of the countryside until the 1970’s, when .Dutch elm disease, carried by the elm beetle killed large numbers of them. Happily, the effects of Dutch elm disease have abated and they can now be planted again.
They grow well in most soils provided that they are not too light and dry.  They transplant well, particularly when dormant.
The most widely planted varieties are Ulmus procera ‘Louis Van Houtte’, the golden elm, which forms a round-headed spreading tree up to seven metres high and five metres wide. This tree is colourful from bud burst through to autumn.  It tolerates wind better than most other deciduous trees. It must be propagated by grafting on to rootstocks of Ulmus glabra, the Scotch elm. 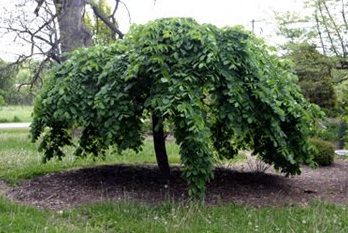 A variety of Ulmus glabra, the ‘Camperdown’ has a wide-spreading, weeping habit and is an attractive specimen tree.  It, too, is grafted on to an ordinary elm rootstock.  The leaves are longer than the common elm.