The European Beech (Fagus sylvatica) forms a large, wide spreading tree suitable for large gardens. If you are willing to wait and have a long term garden, beech can be clipped into the most wonderful deciduous hedge. The native species is rarely used and several cultivated forms are grown.  The foliage varies from golden, variegated, through to the deep purple ‘copper beech’ (Fagus sylvatica ‘Purpurea’ and ‘Riversii’).  The American beech (Fagus grandifolia) can be seen in parks and large gardens.  To maintain true characteristics, shoots are usually grafted on to rootstocks.  Though, they can be grown from stratified seed. These trees are easily grown and tolerate most soils, though do not do well in coastal conditions.  They are hardy to a surprising -30 degrees Celsius. 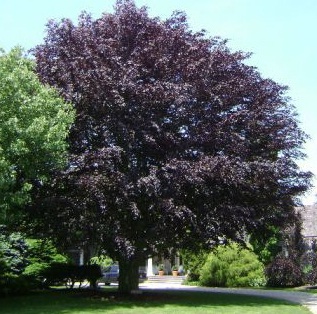 The southern beeches (Nothofagus), are closely related species from the Southern hemisphere and have both deciduous and evergreen varieties.  They are natives of the southern parts of the southern continents, what was once part of a vast landmass known as Gondwanaland. In their native environments, they form forest in South East Australia, New Zealand, Chile and even the highlands of Papua/New Guinea. They flower in May and have similar three-sided nuts enclosed in a scaly cup.
The Mountain Beech (Nothofagus solandri), is a native of the mountains of both the North and South Islands of New Zealand and grows up to 20m high.  It has small, untoothed, rounded leaves, 1cm long.  The Black Beech has larger, flat leaves and the Silver Beech (Nothofageus menziesii) has toothed leaves.  The best choice for gardens would be Nothofagus fusca because of its bronze toned foliage. The southern beeches are less hardy, only to -15 degrees Celsius, usually raised from seed but can be propagated from semi ripe tip cuttings taken in late summer and autumn. 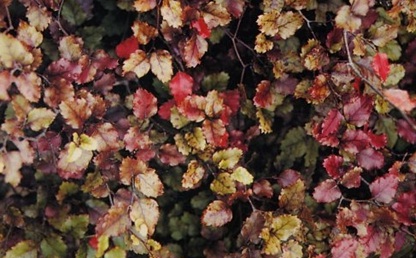