Very often, mature apple and pear trees grow vigorously but do not form fruit. How often one hears the story about the tree that fails to produce fruit until the owner loses patience and attempts to cut it down with an axe or tries to wrench it from the soil and is then drawn away to do some other job.

The work is put aside for a year or two and a heavy crops follow. Another old country remedy for poor fruiting is to strike the trunk several times with an axe. 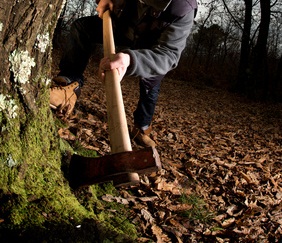 There are good reasons why this drastic action appears to work.  Trees, when under stress attempt to reproduce in an effort to continue the species.  Pruning, in its many forms, is a form of controlled damage to bring about this response. There are two ways in which non fruiting trees can be encouraged to bear fruit, root pruning and bark ringing.

Root pruning is carried out in late autumn or early winter, after leaf fall when dormancy begins.  If the tree is five years old or less, it can be lifted from the soil completely provided it has a good root ball.  Mark the side of the tree so that it is in the same position when replanted. Cut out the tap root and prune back the main roots, replace the tree, tightly pack the soil and stake firmly.

With older trees, root pruning is carried out in stages. Dig a semicircular trench about 1 metre from the trunk, sever the thick roots and leave the fibrous roots. Refill the trench, adding wood ash to the soil, firm in and water well.  The other half of the roots can be pruned in the same way the following year.  With trees planted against a wall, prune half a semicircle one year and the rest the next. Take care to make upward facing cuts on the roots and mulch with well rotted manure or compost when the soil is replaced. 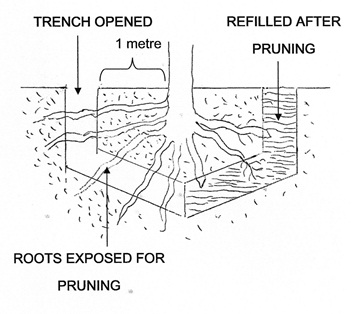 Bark ringing is a simple operation that must be carried out with care.  It is usually carried out in spring.  The sap is flowing freely and the bark can be easily lifted without tearing.  It is not advised on trees other than apples and pears.

With a chisel or sharp knife, cut two half rings of bark, 1cm deep, from opposite sides of the trunk, one 10cm below the other.  The upper ring should be about 30cm below the lowest tree branch.  The cuts are made down but not into the wood and the cuts should be bound with adhesive tape and sealed with grafting wax.  On a very large tree, four sections of bark can be cut, leaving gaps of 2-3cm between.

Bark ringing may not entirely be the answer and attention should be paid to feeding the tree and correct pruning.