This method of propagation occurs naturally in plants, where low growing stems form roots when in contact with the ground. When the roots have formed, the stem can be severed from the parent plant and grown on to form a new plant.

As with other forms of vegetative propagation, the new individual with be genetically identical to the parent.  This form of propagation takes some time with the advantage of very little attention required.  Often it takes place without our intervention.  Next time you are tidying leaf litter from the base of spreading, low growing conifers, see if any f the horizontal stems have grown roots where they have been part buried in the leaf mould.

Simply bend down a shoot and peg it into the earth.  It helps if the peg is covered with soil and the shoot cut part way through.  This encourages hormones within the plant to stimulate root growth at the point of contact with the soil.  Layering works best with growth of about a year old, so a plant can be prepared by pruning back in late winter so that new shoots develop.  These new, vigorous shoots can be bent down and pegged the following year. 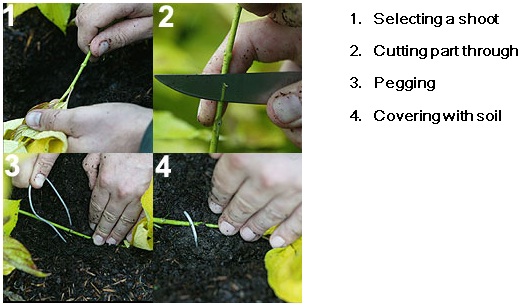 If the stem cannot be bent, we resort to air layering.  Instead of bending the shoot to the soil, a square of bark is removed from the stem and the site of the wound packed with wet moss.  To prevent the moss from drying, it is covered with aluminium foil, polythene or cling film.  When roots have developed, the stem is severed, the waterproof covering is removed and the new plant potted. 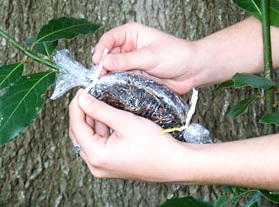