Budding, like grafting, is another method of plant propagation where a part of one plant forms a union with another closely related plant. Seeds of many trees and shrubs are the product of two genetically different parent plants so the new plants produced will be different from the parent plants.

Like grafting, it is carried out on trees that do not readily form roots and popularly, roses.   Rose varieties can be grown from hardwood cuttings but may not produce satisfactory results. By transferring a bud from a desirable variety, the vigour and the characteristics of the rootstock of a budded rose is transferred to the new shoot that forms from the bud, resulting in a much stronger plant. Particularly with standard roses, it is interesting to note the height and strength of the rootstock compared with the growth at the top.

Budding, for the commercial grower can be an efficient and economical method of producing new stock because each shoot can support a large number of buds. It can be carried out with some simple tools by the amateur gardener.  A bud is taken from a well developed shoot and inserted under or into the bark of the rootstock of a closely related species. 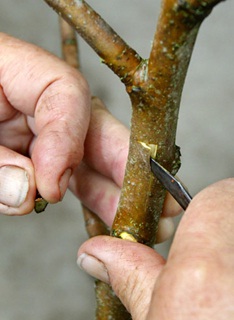 Preparing the T-shaped cut to receive the bud.

Shield budding takes place in mid-summer when the bark can be easily lifted.  A T-shaped cut is made in the bark of the rootstock and the bark carefully lifted, taking care not to touch the wound to avoid infection. With the sharp knife, a shield shaped section of the scion or ‘budwood’ including the bud is removed. The leaf is cut off, leaving the petiole to act as a ’handle’. Any remaining wood at the back of the bud is removed.  The bud is then slipped into the T-shaped cut, making sure that the cambium layers are in contact.  The bud is then secured with grafting tape and sealed with grafting wax to prevent drying out. 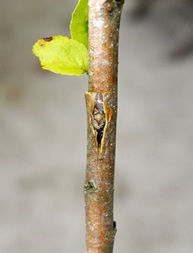 Chip budding is carried out from mid summer to early autumn.  From mid summer, suitable wood is chosen, preferably the same thickness as the rootstock.  Select non flowering wood from well ripened current season’s growth.  Using a clean, sharp knife, cut 2cm below the bud, cutting at an angle of 30 degrees. Make a second cut the same distance above the bud and cut through to remove a rectangular sliver of wood.  Make two cuts in the rootstock the same size as the removed bud and take away a corresponding piece of stem.  Place the bud chip into the cut rootstock and bind the join with grafting tape, leaving the bud and leaf stalk uncovered. The tape can be removed as the bud swells. 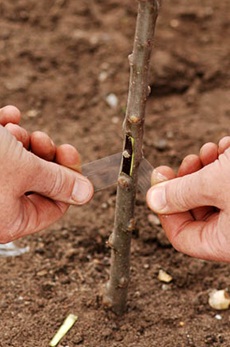 As the bud grows, the rootstock is trimmed and the new shoot supported with a thin stake.