A member of the pea family, wisteria, with its drooping sprays of flowers makes an impressive sight in spring.

With a strong support system, they can be trained against walls, arbours, over pergolas or formed into standards.  They are an extremely versatile and attractive climber, tolerant of a wide range of growing conditions. No wonder they are an extremely popular plant. 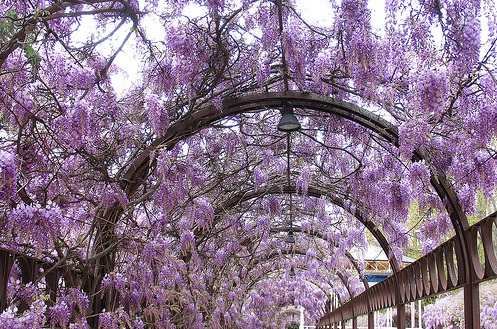 Chinese wisteria grown over a walkway

Most commonly grown wisterias are derived from the Japanese (Wisteria floribunda) and the Chinese (Wisteria sinensis) wisterias.    The silky wisteria ( Wisteria venusta),  has broad silky leaves and white to pale lavender flowers and is less common. The Japanese and Chinese wisteria, both have pinnate leaves, long racemes of white, lavender or purple pendulous flowers. Wisteria x formosa is a cross between the two, having narrow racemes and drooping foliage. 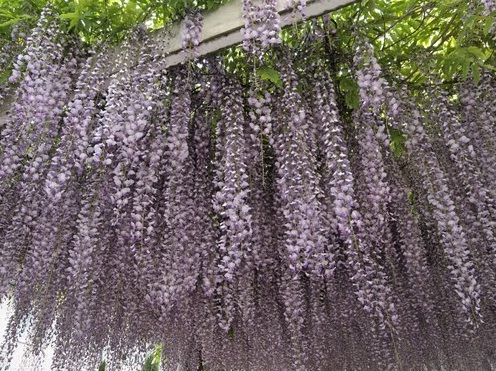 Japanese wisteria grown on a pergola

Wisteria may be reluctant to flower unless the vigorous, leafy, summer shoots are pruned and the plant’s energy diverted to forming flower buds.  Flowering is also encouraged by training stems to grow horizontally.  Flower buds are produced on short spurs. Long growths and shorter lateral growths are cut back in late summer, only leaving stems unpruned to extend the framework.  In winter, cut back the summer pruned spur shoots to two or three buds and cut back to 15cm any long growths developing after summer pruning.

Wisterias can be trained into weeping standards by supporting the stem with a strong stake.  When the stem reaches the desired height, the growing tip is pinched out to encourage lateral development.  Allow only four or five laterals and remove others as they appear. 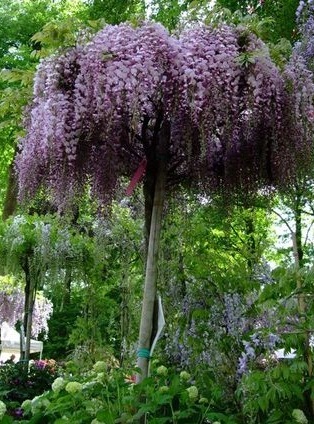 Weeping standards can be formed with the help of a strong stake.

They are hardy to -15oC and grow easily in any moist, well drained soil, in sun or partial shade.  Wisterias are usually propagated from semi-ripe cuttings, layering or grafting.