The New Zealand flax (Phormium cookianum) is not linen flax, but is related to day lilies and is native only to New Zealand and Norfolk Island. It has been widely grown for its fibre and as a garden plant.  I came across it as a young teacher, newly migrated to New Zealand. They were growing as a hedge at the school boundary on a windswept headland in the far south of the South Island. I was amazed by its robustness and ability to survive well in the sandy soils.  Some of the Maori children demonstrated to me the strength of its fibres and how easily it could be plaited and woven.  I did some further reading and discovered that huge quantities were exchanged with European traders for goods, and later, muskets. Strands could be plaited into bags, baskets and rainproof cloaks.  The fibres could be separated by beating and made into a textile.  Europeans made the fibres into marine ropes. Here was a true wonder plant that could grow from the seashore to the mountains, tolerate winds, most soils, provide a useful fibre and has many medicinal properties. 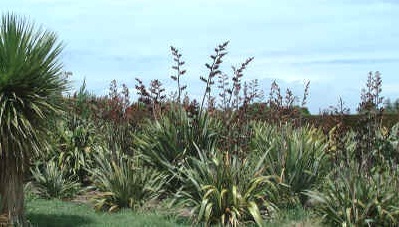 This useful plant can be used as shelter in difficult situations and as a background foil to more colourful plants.  As specimen plants, there are numerous cultivars with coloured and variegated foliage.  ‘Tricolour’, striped, drooping leaves with cream and with red leaf margins, will do well in the open and partial shade and any soil type. Other hybrids have variations on the green, pink, red and bronze themes.

Flaxes are largely untroubled by pests and diseases. Their orange flowers grow on stout canes which dry in winter and are useful as firestarters.  They propagate easily by division.