The hollyhock (Alcea), a relative of the mallow, is an old favourite cottage garden herbaceous perennial that is also grown as a hardy annual or biennial. They are vigorous, need little attention, dying back in winter and self seeding easily.

The stems may reach nearly 3m in height but more usually, 1.5-2m.  Plants are usually placed at the rear of the border for greatest effect.   The flowers, funnel shaped, in shades of red, pink, purple, yellow and white single or double, open up to 10cm.  They appear in mid to late summer, growing on long spikes, opening from the base to the tip. They can be considered a ‘signature’ plant of cottage garden borders, completing the statement far better than any other plants.  The leaves are lobed and rough in texture. 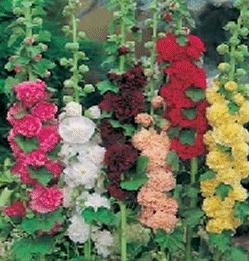 Varieties are usually sold in mixtures and include the peony-like ‘Charter’s Double’, ’Powderpuff’, large double flowers closely set on the stem and ‘Summer Carnival’, grown as an early half-hardy annual. 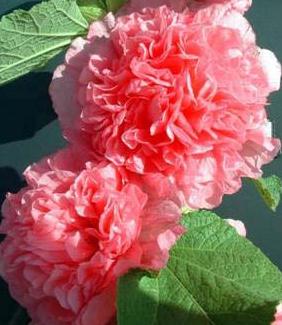 Hollyhocks are drought resistant, growing well in full sun, in positions unsuitable for many other plants.  An individual plant may live for a few years, within that time, they will have produces enough seeds to provide many more replacements.  They have deep taproots making transplanting and removal difficult.

They are susceptible to aphids and capsid bugs and affected by hollyhock rust, disfiguring the leaves.