Buxus or Box (Buxus sempervirens) is a small, densely leaved evergreen shrub. It is a native of Southern Europe and Western Asia. Its ability to tolerate heavy and regular trimming makes it ideal for hedging and topiary.  It is believed to have been used as a hedging plant since Roman times. They are a popular subject for the borders of formal gardens and parterres. There are many forms, ranging in height from 30 cm in height to 2m, with cream and variegated forms.  Buxus is usually slow growing and does best in moist, well drained soils but is drought tolerant and can grow in a wide variety of soil types. 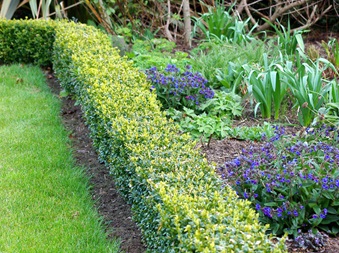 Buxus is propagated by taking semi-ripe cuttings from the current season’s growth, in late summer and early autumn.  Remove the leaves from the lower third of the stem, treat with hormone rooting powder and place in a suitable medium.  They need to be watered regularly and a fungicide applied to prevent disease. Transplant carefully when the roots have formed. 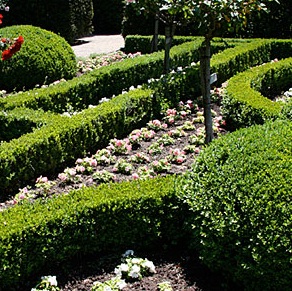 Buxus can be trimmed to a variety of shapes.

When planting a hedge, mark out the line with string and pegs and maintain a planting distance of about 25cm apart.  They can tolerate both sun or semi shade but need regular watering in the early stages of growth. Some people object to the smell of boxwood, so it is a good idea to avoid planting near or under windows.

Buxus are fairly slow growing and only need to be clipped once a year, any time but winter.  The first pruning should be severe to encourage bushiness and to fill the base. String lines again can be used to maintain an even height. Remove any dead or diseased branches. From then, it only needs to be carried out to maintain shape and height.