Amaranthus is better known by its popular name of ‘Love Lies a Bleeding’. It is a broad family of plants that grows in temperate and tropical regions, growing to a metre in height.

Although it is more familiar as an annual bedding subject, it is cultivated in many parts of the world as a leaf vegetable and for its highly nutritious seeds. The foliage of all varieties is edible and said to taste like spinach.

The Aztecs used amaranthus flowers in their ceremonies and it was a staple food of the Incas.  Today, its seeds are toasted and mixed with honey to form a confection known as ‘alegra’. 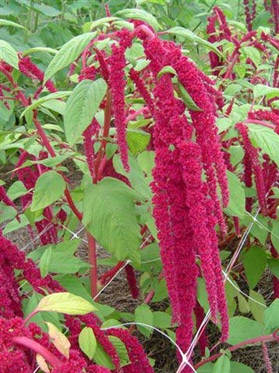 Amaranthus caudatus is most commonly grown as a border plant, preferring part shade to full sunlight. It can be sown indoors or outdoors, when danger of frost is past.  Germination takes between ten and fourteen days at about 20 degrees Celsius.  The plants require regular watering and moisture must be maintained all season. A slow release fertiliser is preferred.
As well as the well–known  red caudatus variety, there are a range of colours and flower types.  Amaranthus caudatus ‘Viridis’ , growing a metre to one and a half metres, is similar to Love-Lies-Bleeding but with drooping lime green flowers that are excellent as cut flowers or for drying. Amaranthus tricolour ‘Perfecta’, has scarlet and yellow leaves on top of the plant and chocolate brown and yellow leaves below. 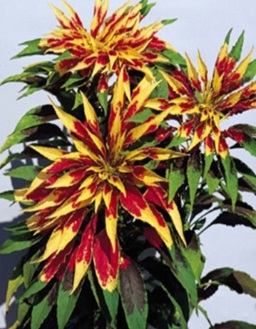 At the end of the summer, the flower tassels can be shaken and the seed collected and eaten or replanted the next season.

BACK TO PLANTS INDEX PAGE