Sorrel (Rumex acetosa) is an upright herbaceous perennial herb with leaves similar to its relative, the dock weed. It has been in use for thousands of years. Partially digested leaves have been found in the stomach remains Iron Age people buried in peat bogs.

It is a remarkably versatile plant. 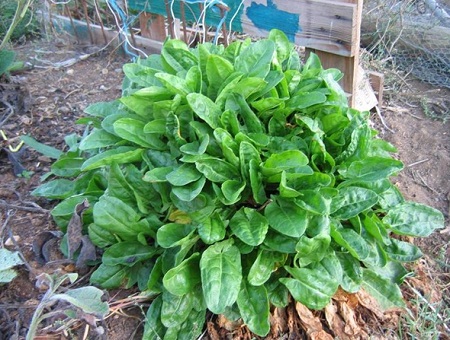 Sorrel, a close relative of the dock

The leaves can survive through mild winters and can be eaten raw or cooked.  Sorrel leaves have a pleasant citrus flavour but can be overpowering in large amounts. Pick the young leaves before flowering and use them in salads, soups and sauces. They may be frozen. The juice was once used to curdle milk.
Medicinally, the leaves were used as a cure for scurvy, a diuretic and a laxative.  Its sharp taste comes from oxalic acid which is poisonous in large amounts.
It is very easily grown, survives in most soils and tolerates shade.  Plants will even survive dense weed growth. Cutting down the flowering heads encourages new leaf growth.  Plants can be divided at all times of the year, though establish more quickly in spring.