The first task in establishing a new garden is to turn over the soil.  The spade and fork are usually first in a long line of tools that we need.  Again, get as good as you can afford. 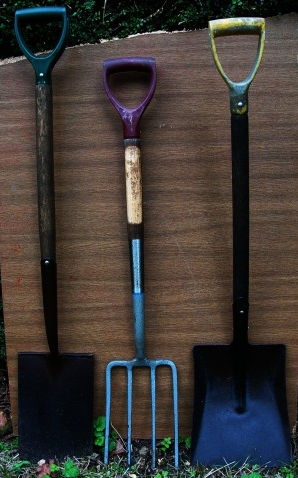 Garden spade, fork and shovel.
Note the raised sides on the shovel for retaining loose material

Spades
Spades are the best for general cultivation, turning over the soil, digging planting holes and moving soil.  The standard size has a blade 30cm long by 20cm wide, long enough to reach the lower limit of topsoils and wide enough to lift a reasonably large ‘spit’ of soil for turning over.  If the standard measure of soil is too heavy, a narrower spade can be bought, lifting less soil but with the same depth of cultivation.
There are light, small, border spades for turning over soil in small spaces where cultivation depth is less important and there are intermediate spades.  Automatic spades work on a spring and lever system, throwing the soil without need to bend, ideal for those with back problems.
Forks
Garden forks are also used for general cultivation and in addition, moving loose materials like compost, manure and general clippings and for lifting root vegetables.  They normally have four prongs and of the same dimensions as the spade.  Like spades, they come in several sizes.
There are forks of different types and the potato fork has flat prongs and generally a larger head than the standard fork.
For general digging, the fork has the advantage that it is easier to drive into the ground and it is less likely to cut roots of perennial weeds, making them easier to identify and remove.  The fork is useful in weeding, allowing the soil to be loosened so that the roots can be easily lifted.
Spades and forks are made of flexible, carbon steel that easily sharpened and needs cleaning after use.  Stainless steel is very durable but difficult to sharpen.
Shovels
Shovels are not strictly garden tools but are extremely useful for landscaping work.  They have raised sides and are intended for moving materials. A shovel can be used for mixing growing medium, filling a barrow, mixing cement and concrete and many landscaping jobs.  I would not be without one.
Handles
Handles should be the correct length for the user’s height, to reduce back strain.  A long shaft is best for tall people. Shafts are made of metal, wood or plastic. Even metal shafts may break if placed under too much stress and it is important not to leave tools out even on dry days. Most hilts are plastic, now, and wooden T-shaped hilts, though comfortable, are rarely seen.