Organic gardeners use crop rotation, composting, plant and animal diversity and avoid the use of artificial chemicals in fertilisers, pest controls and plant conditioners. Organic gardening is simply gardening like it used to be.

.  In pre-industrial times, when transport and communication was much more difficult, we could not get into the car and go down the garden centre for a half litre of glyphosate, a carton of Phostrogen and a punnet of pea plants.  There were no herbicides, compost and manure were the only fertilisers and you grew plants from saved seed. Moving bulk materials was a wheelbarrow job.  There was no choice but to grow organically.  There is a great deal of pleasure to be had from growing organically and without doubt, the planet would benefit if more food would be grown in this way, though we would have to pay more for it.

Biodynamic gardeners take a few steps beyond.  They believe a farm or garden should be a balanced and self sustaining unit, following the organic model where, as much as possible, nutrient levels and plant health is maintained from within the land holding.  It is a good idea to recycle and to return as much as possible without relying on ‘outside’ sources, but for them there is more to it than that.

Early last century, a group of farmers concerned about declining health of soils, plants and animals sought the advice of Rudolf Steiner, founder of the anthoposophic movement and investigator of forces in nature. Part of this movement laid the principles of biodynamic farming and gardening which ‘related the ecology of farming and gardening to that of the cosmos’.

Part of achieving this balanced garden ecosystem is the use of preparations made from fermented manure, minerals and herbs which are used to help ‘restore and harmonise the life forces, improving nutrition, quality and flavour’.  These nine preparations are given numbers from 500 to 508. 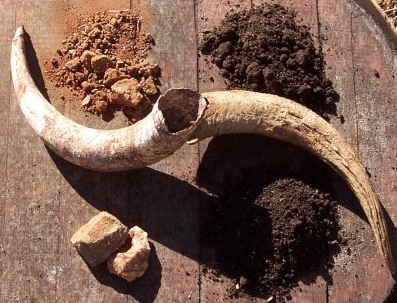 Preparations are made from various substances stuffed into animal parts

Starting with horn manure at 500, a cow horn is filled with cow manure and buried in the autumn and dug up the following spring.  501 is made of crushed quartz placed in a cow horn, buried in spring and dug up the following autumn.  Both are mixed with water and sprayed on to the crop in the wet season, preferably on an overcast day or early morning.  One teaspoon of horn contents is mixed with 40-60 litres of water and stirred in both directions. 502 to 508 are composting preparations made from various animal parts filled with different herbs and buried in earth.  Again, small amounts are used in ‘homeopathic’ quantities and are said to initiate a certain composting process. 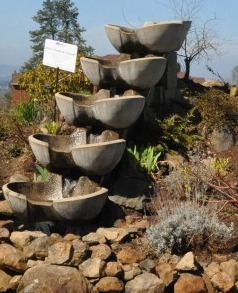 A clever device is used for mixing preparations with water to produce ‘vortexes’ in both directions.

Each plant part is matched to an element, earth, air fire and water and each element is matched with signs of the zodiac. It is believed that as the moon passes through each constellation, so the corresponding plant part will be affected.
Another interesting practice is that of ‘peppering’ to control weeds and pests. Viable weed seeds or the skin of a pest animal is placed in a tin and burnt when the moon is full.  The ash is then mixed with fine sand or wood ash and then spread over the affected area. It does not kill the pest but it is claimed to inhibit reproduction.
As gardeners, we want to achieve the best results possible for our labours.  It gives a feeling of self pride to see the outcome of our work giving other people and ourselves pleasure in the garden and on the table. There are many reasons why our own produce, to us and to others has a much better flavour than that produced commercially. A biodynamic approach will work for those that try it.  Many of the principles of plant care, choice of cultivar, composting and sustainability sit well with gardeners and can be put down to good husbandry. The results are bound to be better than the commercial model.  After all, gardening is a hobby and we do not charge for our time.  Much of the evidence for the efficacy of biodynamics is anecdotal and the experimental work subjective. Cursory inspections of biodynamic ideas reveal that the methods used rely on a system of belief that they will work.  Rudolf Steiner, himself, was not a farmer or gardener and his suggestions were based on his feelings rather than practical knowledge.